Behind a Bush with Nietzsche 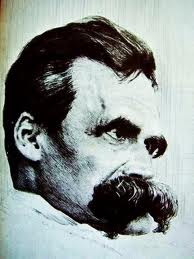 In his famous essay “On Truth and Lying in a Non-Moral Sense”, Nietzsche proposed the metaphoric scenario “when someone hides something behind a bush and looks for it again in the same place and finds it there as well, there is not much to praise in such seeking and finding”.   What he meant was (we assume – and one is forced to do lots of assuming with good old Friedrich) what kind of klutz would deliberately hide something (say his car keys) somewhere obscure (say in his socks drawer), make a huge fuss about having lost them, blame his wife, kids, the dog and anyone else unlucky enough to live with him, have a pretend brainwave, look in his socks drawer, then charge about saying “I found them, I found them, thank God someone around here has some brains”?  Hello????  Would we agree with the klutz’s latter statement?  No, and what a pain in the ass we’d think that guy was.  Good point Fried.

But, and one hesitates to be small minded here, it does raise the intriguing question of what the hell Nietzsche himself was hiding behind that bloody great bush of a moustache?  Did he ever go looking for his mouth in there, say to shovel in some Sauerkraut or take a slug of Schnapps?  One presumes he didn’t smoke, otherwise it would have given a whole new meaning to the burning bush.  Of course he did say in one of his books “the most welcome joke to me is the one that takes the place of a heavy, not altogether innocuous thought, at once a cautionary hint of the finger and a flash of the eye.”  So the mo was probably just his little joke, a cautionary hint of what might happen if you hide your Remington behind a bush.

I’ve been studying (and I use the word advisedly) Nietzsche for the past couple of weeks, the process being somewhat like trying to put your foot on a beetle that continually scuttles away just out of reach.  One of the world’s celebrated thinkers, Nietzsche is perhaps most remembered for his controversial pronouncement “God is Dead” – thereby setting himself up for decades to come as the target of countless jokes and toilet stall graffiti proclaiming “’God is dead’ said Nietzsche; ‘Nietzsche is dead’, said God”.  One wonders how he might have reacted to that, or indeed how God (presuming he isn’t dead) might have also.  If God is in fact dead, could someone please inform Pope Francis and tell him he’s been hired under false pretences.

As I understand it, Nietzsche was a forerunner of the Structuralist school of thought, or was it the Poststructuralist?  So, following along with that logic, that must make him a Prestructuralist.  I haven’t yet got to the section where they tell you what these terms actually mean, but I’m wondering whether that’s strictly necessary.  It may well be enough to just toss them into the conversation here and there, on the assumption that no-one will be prepared to admit how dumb they are by asking you what you’re talking about.  In fact,  I am beginning to think this may be the whole key to Literary Theory.  As Friedrich said, there is no truth, it is all interpretation.  How can you argue with that?

David Lodge, an eminent literary expert as well as a super-successful and entertaining novelist, obviously agrees with me.  In his hilarious book “Small World” he has a literary professor waxing lyrical at an academic conference about just this subject.  Arguing the toss between the idea that the text of a literary work is fixed, immutable and carved in stone for all time, or alternatively that it is an open book, a malleable entity, thereby offering open slather to any passing literary theorist who happens to peruse it, he pours scorn on the fixed idea.  “Not so,” he says, “language is a code … every decoding is another encoding”.   Falling into line somewhat with Nietzsche’s idea of the Eternal Recurrence, (or the Vicious Cycle) he goes on to describe discourse as an “endless cycle of encoding-decoding-encoding” and so on.  This is a particular problem he notes with conversation and anyone who’s played that game whatever it’s called where everyone stands in a circle and the first person passes a message to the second and so on until the message, totally garbled by then, gets back to the originator, will understand this perfectly.  “Conversation,” he says “is like playing tennis with a ball made of Krazy Putty that keeps coming back over the net in a different shape”.   A bit like Pass the Parcel when you come to think of it.

Just as I was warming to this rather clever allegory of the decoding of text and thinking how brilliantly Nietzschean of Lodge, his professor got a bit carried away.  “The tennis analogy,” he said “will not do for the activity of reading”.  Reading is not a simple batting back and forth across the net of messages from one signifier to another (now I’m getting positively Saussurian), it is rather “an endless tantalising leading on, a flirtation without consummation, or if there is consummation, it is solitary, masturbatory”.  He goes on in the same vein, warming to his subject considerably, to the point where you realise he’s obviously been reading too many Playboys and most of his audience leave, but you get the point.

2 Responses to Behind a Bush with Nietzsche

For lovers of Australian and New Zealand literary fiction; Ambassador for Australian literature

A blog by writer Andrew Hutchinson

Writer of fiction. Pursuer of publication. Editor at large.